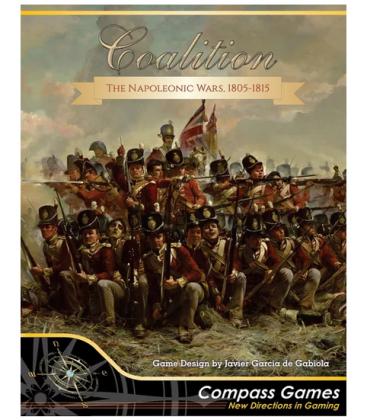 COALITION! is a game about the Napoleonic Wars (1805-1815) for two to six players that can be completed in a single evening. The scope of the game is grand-strategy with some operational components (as the execution of maneuvers as Marching to the Sound of the Guns), being the British player launching successive Coalitions to destroy France and his Empire. You will remember and reenact this flamboyant period handling historical Generals, Armies, Fleets and Event Cards. Prepare to fight from Austerlitz to Waterloo in just one evening!

Although not an event-driven board game in the classic sense, Event cards are used to recreate historical situations that could imply some modifications in the general rules of the game, or even change the fate of a game dramatically.

The British Player will launch successive Coalitions of allied countries to destroy the French Empire, and the French player will try to survive and win the game by earning Gloire and Victory Points or by surrendering Great Britain through the Continental Blockade. Also, in the 3-6 players version, every individual player will control a Major Power with his own agenda, trying to win the game also through their own Victory and Gloire Points.