This is complete refit of the 1989 game. New map and counters, all done by Charles Kibler. It simulates the abortive attempt on 30 and 31 October 1813 by the Austro-Bavarians under de Wrede to prevent Napoleon's escape from Germany after the defeat at Leipzig, by blocking him near Frankfurt.

The game uses the now robust latest version of the rules, which employs roster sheets and oblong counters to simulate formation changes between line and column. The battle is fought at regimental level at a scale of 250m per hex, and in 30-minute game turns. Losses are recorded on roster sheets, and the rules, in english (the French version will be available on the Pratzen website), are of medium complexity.

This new edition also includes the second day battle set up and units, when de Wrede tried to attack the French after the Emperor left. 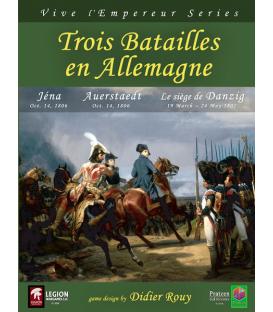