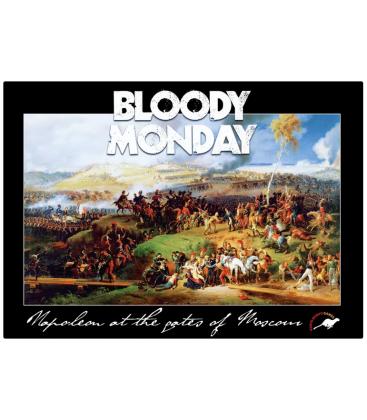 In June, 1812, Napoleon invaded Russia with over 500,000 troops, not so much to "conquer" anything but really intending to fight on big battle (like Austerlitz) and then dictate terms. Unfortunately, the Russian armies did not comply.

He finally got a big battle at Smolensk, which could be called a French victory...except the Russian armies just retreated and burned. Now under the command of (recalled from retirement) Marshal Kutuzov, the army made a stand near the small village of Borodino, which had only marginal useful defensive terrain but was the best place to stop the French before Moscow.

After two days of skirmishing and probing, the major battle took place Monday, September 7. About 250,000 troops were involved and the two armies lost about 70,000 casualties. It was the single bloodiest day of the entire Napoleonic Wars period — "Bloody Monday".

Using the game engine from Moscow '41 (and not VNG's Waterloo 200), the game Bloody Monday provides action and challenges, plus the joy of die rolling. Unlike other VNG products, Bloody Monday uses large 20mm blocks to provide enough detail and different unit types but still keep the game playable in one sitting. Colorful PVC stickers and "fog of war" give players everything they need in an easy mechanism.